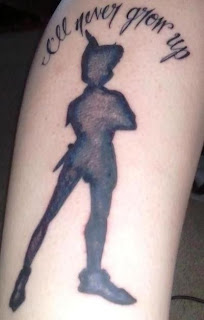 Peter Pan..... I have watched nearly every version of this film.  I love so much about its message, becoming like little children, believing and not being jaded by the terrors of adulthood.  Yet at the same time, I find the messages are better suited in analogies and inspiration.  Wendy did not MARRY Peter Pan.  A woman is unable to live in Never Never Land for ever.  And from what I remember, it didn't go over so well for Tink either.

You may know him.... Peter Pan in real life.  He is an adult male, generally over the age of 30 years.  He has the appearance of a Man.  He owns his own car, maybe his own house..... and he is A LOT OF FUN.  What woman doesn't want to have fun with her man? I don't know any woman that enjoys being with an uptight fellow. Yet life is about balance, and Peter Pan is unbalanced, misaligned.

I love what The Single Dating Diva said about it in her blog post. I feel like her bullet points are excellent identifiers.  She coins the phrase "Peter Pan Syndrome" (which studies have proven over more than three decades, and I 'm sure much longer than that).  Here is her list:

How do you know you or someone you have met has Peter Pan Syndrome?  Here are some signs:
(You can find more of her helpful tips and insights at Single Dating Diva )

Someone deemed my most recent relationship a Peter Pan, yet, I'm not sure that's it. He wasn't a playboy, just an out of sorts guy finding his way.  However, the relationship before that.... absolutely a Peter Pan.  T.L. told me he was the coolest dude I'd ever meet (see 5th bullet point and 8th bullet point)  He is over 40 and still goes clubbing/drinking every weekend.  He said he wanted a relationship, but hadn't found anyone suitable enough for him (yes, I found that seriously insulting).

I fear it is a sad case these days.... because there are a good number of men who refuse to grow up. To put their Man Pants on and own up to life, to make decisions, to commit to something greater than themselves, to exercise loyalty.  Relationships are not easy.  Yet when TWO people are willing to go the distance, relationships become visibly beautiful.  Be ware of Peter Pan..... he, I am sad to say, is not a Man With A Plan.  ( I wrote a piece about that - Funky Sunshine )


As always, I love hearing your stories.  Feel free to share them, your comments, your opinions here.